5 Things to know about Pre-nuptial Agreements 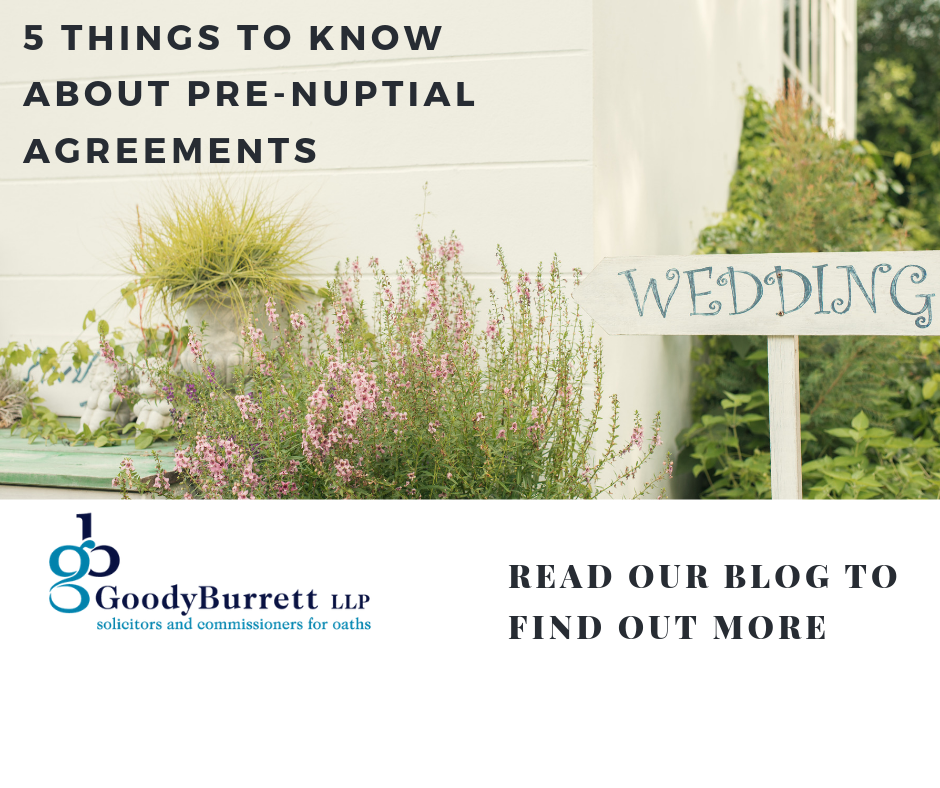 5 Things to know about Pre-nuptial Agreements

It sets out ownership of all their belongings (including money, assets and property) and explains how it will be divided in the event of the breakdown of their marriage.

2) Are pre-nuptial agreements legal in the UK?

Currently, pre-nuptial agreements are not legally binding in the UK.

However, a judge is likely to take the contracts into account when overseeing a divorce case and uphold them. Following precedent set in the 2010 ground-breaking case of Radmacher v. Granatino, prenuptial agreements are now afforded heavy evidential weight within the UK Family Court, unless considered to be unfair.

For the agreement to be upheld, judges have to be sure certain checks were put into place.

This includes that both partners received independent legal advice, that they both fully disclosed their assets and that neither of them was under duress to sign the agreement.

Judges are not likely to take into account agreements signed less than three weeks before the marriage or contracts where the division of assets is not fair or realistic,especially if it’s deemed to be unfair to any children of the marriage.

3) Why get a pre-nuptial agreement?

Money can be an extremely emotive topic in a relationship, especially if you have different attitudes towards spending and saving. A prenuptial agreement provides a clear agreement that can lead to peace of mind for both parties.

You might think about getting a prenuptial agreement for the following reasons:

4) What should be included in a prenuptial agreement?

Every prenuptial agreement is tailored to a couple’s particular circumstances; however it will usually contain an inventory of each partner’s assets, and details of how they are to be dealt with in the event of a marriage breakdown.

It may also set out post-divorce financial arrangements for children, particularly in marriages where one or both partners already have children from previous relationships. Courts will pay particular attention to any matters relating to children, and are unlikely to support any terms in the agreement that are deemed to be harmful to the interests of a child.

5) What happens to the assets if a marriage with no pre-nupends in divorce?

In the UK, the court sees the couple’s respective roles as “economic provider and child carer/homemaker as of equal value to the welfare of the family”.

This means that without a pre-nup, the starting point for the division of property and assets will generally be equality of assets between both parties.

While this is generally the fairest distribution of a couple’s assets, if any of the reasons for getting a pre-nup outlined in (3) above) apply to you and your partner, then a 50/50 spilt may feel unjust.

There are a number of factors that need to be in place when you enter into a pre-nuptial agreement.

This is because, when considering if the agreement is fair and should be upheld, the court will look at things such as whether both parties understood it properly and if they had enough time to review it before signing.

We’ve put together a checklist to help your pre-nuptial agreement have the best chance of being upheld in a divorce court:

How We Can Help

While pre-nuptial agreements are now legal and enforceable in the UK, they can still be overwritten or even thrown out of court.

At GoodyBurrett, we provide skilled advice on the steps you can take to reduce the possibility of costly arguments over property and other assets if your relationship does not work out.
Already married? Do not worry, it’s not too late, because a Post Nuptial Agreement will be treated in exactly the same way.

For just £99 + VAT we can offer you an initial consultation to provide preliminary guidance to enable you to decide on the best way forward. Contact our Family team for more information.

For more information on Pre-nuptial Agreements