The Conveyancing Quality Scheme (CQS)was established by the Law Society in 2011 and is now a recognised quality standard for residential conveyancing practices. CQS requires member firms to apply each year for reaccreditation to ensure they continue to meet the high standards expected of them.

The scheme sets out its requirements in terms of:

– Technical knowledge in key and emerging legal areas; and

The scheme provides member firms with the ‘protocol’ and requires that they use it on each transaction, whether or not other parties are accredited.

The protocol requires member firms to move conveyancing transactions forward smoothly and transparently, use the most up-to-date forms and follow the client service charter (which requires a high level of service to be provided).

The protocol is also used as a handbook by conveyancers to make clear what responsibilities fall on them / their client (as buyer or seller) and what you can reasonably expect from the other side.

Each year the property department at GoodyBurrett undertakes specific CPD courses and continually reviews its processes to ensure it complies with the standards and requirements set down by the scheme and the firm has been accredited with the scheme since 2012.

We are proud to be members of CQS. Bearing the logo shows we have passed strict tests and have an ongoing record of good quality transactional work together with high standards in client care.

Are you moving home?

For a free, no obligation quote Contact our property team on 01206 577676 or email [email protected] 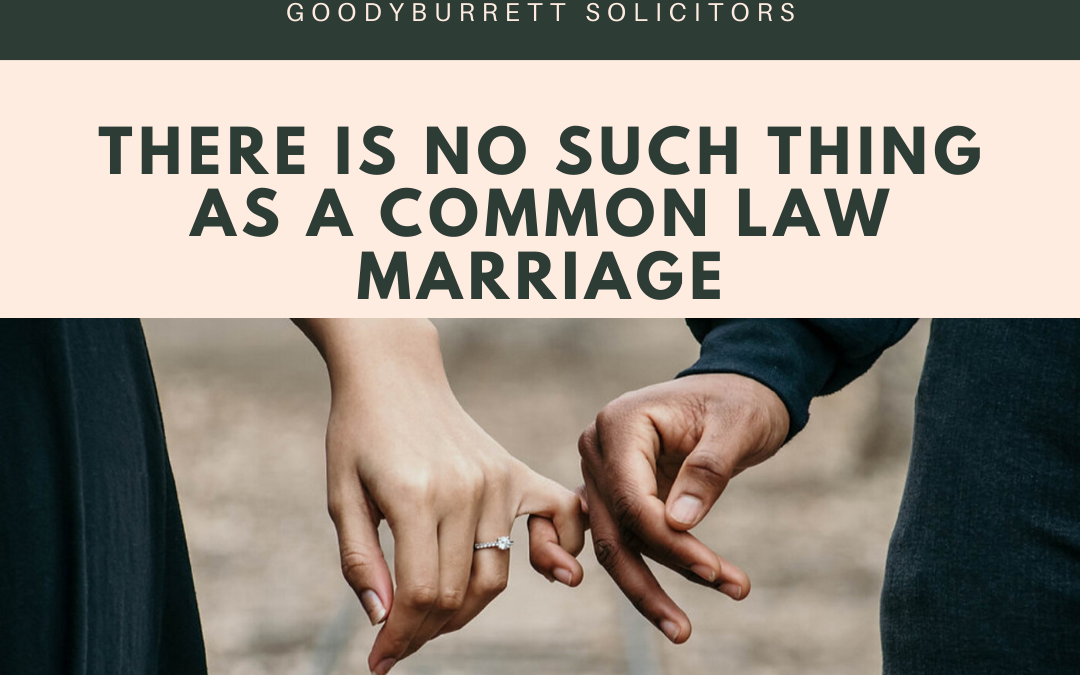 There is no such thing as common law marriage

In spite of all the publicity  that cohabitees do not have the same rights as those who marry or enter into a civil partnership, there are still cohabitees who are labouring under the dangerously mis-held belief that their ‘common law’ marriage will save the day and pave the future with gold if the relationship ends.

So, for all those in this category: THERE IS NO SUCH THING AS A COMMON LAW MARRIAGE.

You are either married or in a civil partnership or you are not.  And not only does this difference in status affect the practical process through which a financial settlement might be achieved upon the break-up of the relationship in life, it affects what one cohabitee might receive in the event of the death of the other if that significant other dies either without having made a Will or having made a Will but without making provision for the partner.

What prompts this topic is a recent case where a client was left in just this situation.   She and her partner lived in his (sole name) home and had done so for over 20 years.  He died without having made a Will.  The rules of Intestacy said that his next of kin should inherit his house, his next of kin being his three adult children by his earlier marriage.  Those children wanted the house sold as soon as possible. Our poor lady was left without home or financial provision and having to face a showdown with three unsympathetic quasi-step children.   The answer was found in the Inheritance (Provision for Families and Dependants) Act 1975; under s.1, cohabitees are entitled to make a claim against the estate of their deceased partner.  Any such claim needs to be made within 6 months of the date of the issue of the grant of representation – so don’t delay.

The Act requires that the surviving partner must have been living in the same household as their partner ‘as husband and wife’ for the whole of the 2 year period ending immediately before the date of the deceased’s death.   Our lady was allowed to remain in her home as her claim being successful, that was what the  Court  ordered as ‘reasonable financial provision’ under the Act.   The Court has wide powers to make orders against the estate of the deceased, and in addition to the transfer of property, this can  include lump sum and maintenance payments

How can we help you?

Most people put off making a Will either because they think they have nothing to leave or they just don’t want to think about death!  Whilst this is understandable, a cohabitee can be extremely vulnerable if provision is not made in a Will – so don’t put it off – make that Will now!

For more information on the above